Every developer always want to build the good programs. Besides necessary knowledge, you also have some rules for yourselve when prommaing. Follow Some of Principles of Good promming, that can help you so much ! 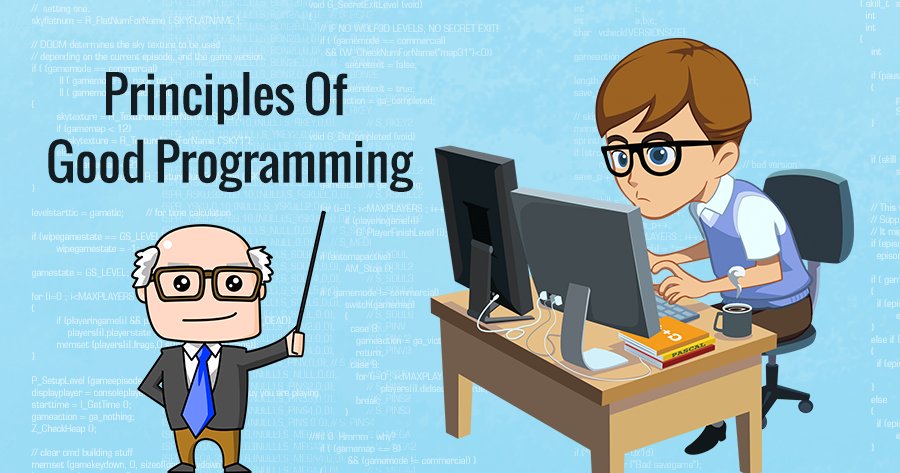 - Probably the single most fundamental tenet in programming is to avoid repetition. Many programming constructs exist solely for that purpose (e.g. loops, functions, classes, and more). As soon as you start repeating yourself (e.g. a long expression, a series of statements, same concept) create a new abstraction.

- Simplicity (and avoiding complexity) should always be a key goal.

Avoid Creating a YAGNI (You aren’t going to need it)

- You should try not to add functionality until you need it.

Do the simplest thing that could possibly work

- A good question to ask one’s self when programming is “What is the simplest thing that could possibly work?” This helps keep us on the path towards simplicity in the design.

- This is actually the title of a book by Steve Krug on web usability that is also relevant in programming. The point is that code should be easily read and understood with a minimum of effort required. If code requires too much thinking from an observer to understand, then it can probably stand to be simplified

Write Code for the Maintainer

- Almost any code that is worth writing is worth maintaining in the future, either by you or by someone else. The future you who has to maintain code often remembers as much of the code, as a complete stranger, so you might as well always write for someone else.

A memorable way to remember this is “Always code as if the person who ends up maintaining your code is a violent psychopath who knows where you live.”

- The principle of least astonishment is usually referenced in regards to the user interface, but the same principle applies to written code. Code should surprise the reader as little as possible. The means following standard conventions, code should do what the comments and name suggest, and potentially surprising side effects should be avoided as much as possible.

- A component of code (e.g. class or function) should perform a single well defined task.

- Any section of code (code block, function, class, etc) should minimize the dependencies on other areas of code. This is achieved by using shared variables as little as possible. “Low coupling is often a sign of a well-structured computer system and a good design, and when combined with high cohesion, supports the general goals of high readability and maintainability”

- Code that has similar functionality should be found within the same component.

- Code components should only communicate with their direct relations (e.g. classes that they inherit from, objects that they contain, objects passed by argument, etc.)

- Don’t even think about optimization unless your code is working, but slower than you want. Only then should you start thinking about optimizing, and then only with the aid of empirical data.

"We should forget about small efficiencies, say about 97% of the time: premature optimization is the root of all evil" Knuth.

- Not very pithy, but as good a principle as any other. Reusing code improves code reliability and decrease development time.

- Different areas of functionality should be managed by distinct and minimally overlapping modules of code.

Lzdev always ready to support. Goodluck to you! Have fun with Programming !